Living on a Prayer: in Istanbul’s Gezi Park, Protesters Try to Bridge the Religious Divide – Vocavit

HomeYazılarLiving on a Prayer: in Istanbul’s Gezi Park... 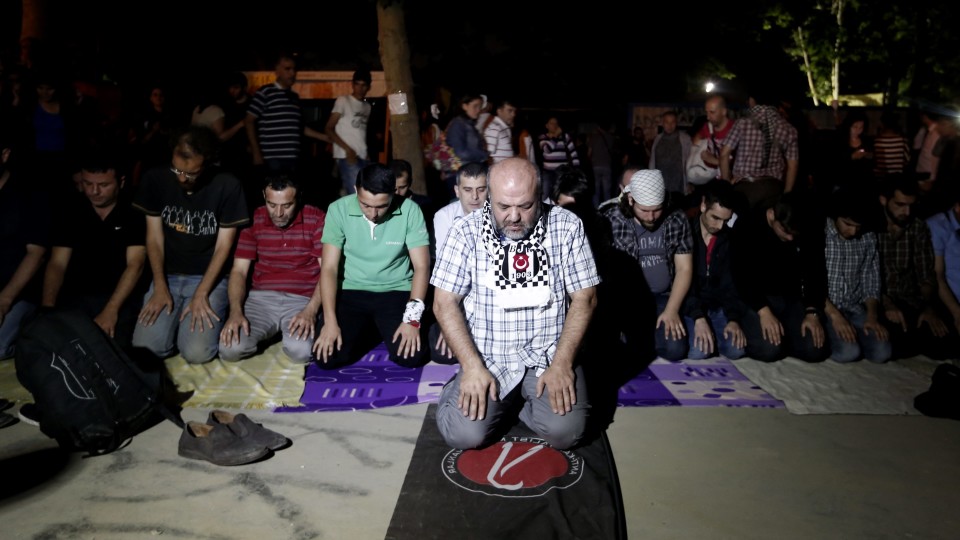 Since the protests in Turkey began last week, thousands have camped out in central Istanbul, demonstrating against the government’s plan to tear down Gezi Park and replace it with a shopping mall and a replica of an Ottoman era military barracks.

Most protesters are young and secular, but earlier this week, a group of religious anti-capitalists led by the Islamic theologian, Ihsan Eliacik, prayed at the park in front of several thousand in honor of kandil, a Muslim celebration of the Prophet Mohammad’s ascension to heaven. Though a number of religious Muslims have been part of the demonstrations, the group’s prayer appeared to mark the largest presence of religious conservatives at the protests since they began last week – something activists hope will energize their movement.

Eliacik and his approximately 40 followers, known as the Anti-Capitalist Muslims, have been longstanding critics of the ruling Justice and Development Party (AKP). On numerous occasions, Eliacik has derided the government for installing what he calls a “looting regime,” referring to the construction boom that created a wealthy class of AKP supporters. “This shopping mall obsession, these concrete blocks — we reject this,” he told Vocativ in an interview. “That’s why we are active in the protests.”

Over the past decade, with the rise of the AKP, Turkey has been extremely polarized over what role religion should play in state policy. Yet the Occupy Gezi has, at least to some extent, challenged preconceived notions about this rift, in part due to Eliacik’s supporters, the presence of religious women in the park and the support of a variety of writers for conservative newspapers who oppose the new construction.

Even some moderate Islamist groups who were once allies of Turkish Prime Minister Recep Tayyip Erdoğan have begun criticizing the government’s Gezi Park policy. Fethullah Gülen, an influential Muslim cleric and the leader of the ‘Hizmet’ (The Service) movement, said in a statement that the protests have to be taken seriously. “Who is to blame for this unrest?” Gülen said. “Those who overlooked the protests by labeling it as ‘this and that?’ Or should we blame those who are involved in the violence? Or should we blame the system overall?”

The Abant Platform, a think-tank affiliated with Gülen, released its own statement saying that, “some of the government’s recently adopted regulations are perceived as interfering with people’s lifestyles and this has caused some disturbances among society.” The think-tank also urged the Erdoğan administration to “revise these decisions, which will benefit of the country.”

Over the past few days, “the veiled woman at the protests,” as captured by news cameras, became a popular headline on Eksisozluk.com, a rolling message site in Turkey, and a symbol of support for the movement by religious conservatives

“[This diversity] has become confusing to many,” Eliacik said. “[But] respect is in the air. We respect people who wear miniskirts — that doesn’t mean that we approve of them. But it means that we see them as equals.”

Other members of the group echoed his sentiments. “The socialists were the first to give us a hand when we mentioned the kandil celebration at the park,” said Kazım İnanç, a member of the religious group. “That says so much about the spirit here.”

To be sure, fundamental differences between religious and secular activists remain potentially divisive. Since the protests began, for instance, beer has common among many activists, who are in part inveighing against the Turkish government’s recent restrictions on alcohol sales. On Wednesday, however, religious activists sent out messages on Twitter, urging protesters to respect the Islamic tradition and not drink alcoholic beverages in the park during the prayer; most appeared to comply, which doesn’t mean the rift no longer exists, but it’s surely a start.