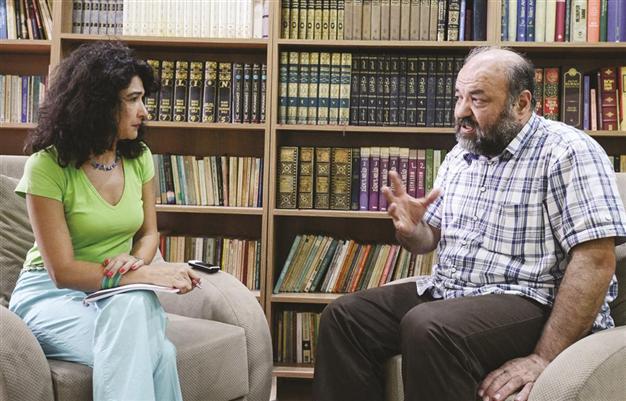 The public face of the Anti-Capitalist Muslims, a key player in the Gezi protests, says the secular demonstrating youth are interested in their libertarian interpretation of Islam. A new understanding of religion could be born out of the Gezi spirit, according to theologian İhsan Eliaçık.

Prime Minister Recep Tayyip Erdoğan has portrayed the Gezi Park protesters as “marauders” with no respect for religion, but many of those participating are youth who are seeking a new approach to faith, according to the public face of the Anti-Capitalist Muslims.

In contrast, the ruling Justice and Development Party (AKP) has a backward understanding of religion, İhsan Eliaçık told the Hürriyet Daily News.

How would you define yourself? Some call you a modernist Islamist.

What do you mean by anti-capitalist and revolutionary?

We want a world where there is no exploitation, no privileges.

Does that make you a socialist?

No. We criticize capitalism on its essence while we criticize socialism by method. We share the fundamental teachings of socialism, like equality, sharing, no discrimination based on social class; but we criticize the practical implementations, the political experiences of the Soviet Union, China and Albania.

What is libertarian Islam?

Islam has been understood in a totalitarian and authoritarian way. When Islam came somewhere, it was understood to oppress all the different identities, preferences and religions. Yet the coming of Islam should provide an environment free of pressure, where everyone can express themselves freely.

The gist of Islam lies in universal values like justice, equality, love and mercy. The Quran says there is no compulsion in religion. In this case, religion means worldviews and lifestyles.

No one can be forced to adopt a certain world view or lifestyle. I deduce this from the Quran. It is wrong to force women to cover their head in Islam.

So when you say equality, you are also including gender equality?

Of course. It is unacceptable that people are oppressed due to their religion, language, political and social identities. There is no place for that in Islam.

In that case, you would argue that Islam is being misinterpreted by the majority of the world?

States use Islam to advance their interests. Saudi Arabia, Pakistan and Afghanistan all interpret Islam with an oppressive understanding. When Islam appears, a restriction of freedoms comes with it instead of freedom.

In this respect, you would most probably place Turkey somewhere else?

Not necessarily. Obviously Turkey has its own particularities. If you ask me where my understanding of Islam could best flourish, I would say Turkey, of course.

The infrastructure of Turkey is ready; it has an experience in secularism, the transition from a sultanate to a republic. This is a strong experience but not sufficient. Turkish secularism needs criticism. It is an oppressive secularism.

You are not categorically against secularism then?

My understanding of secularism is this: clerics should not have the authority to rule just because they are clerics.

So you don’t interpret secularism as separation of state and religion?

No; the Quran says nice things about the state; why should we not take it? Classical secularism excludes the holy book; but we can take the guidance that overlaps with universal values. For instance, it writes that sovereignty belongs to people in the Parliament; next to it we can have a writing that says God orders justice.

The prime minister defended the alcohol ban saying religion orders it; how can we be sure which interpretation we should use once you involve religion?

By discussing it. Otherwise it is also wrong to completely exclude it.

How do you evaluate the 10-year rule of the Justice and Development Party (AKP)?

The AKP implemented capitalism by covering it with Islam; it has used religion to legitimize capitalism. It has no alternative economic approach; on the political side; it has not changed the state’s fundamental reflexes; it has only made some changes to the details. Its own conservative reflexes have become the state itself. There are 204 laws remaining from the 1980 coup period. These need to change. There are 27,000 names of locations that have been changed, starting with Kurdistan. This region has been called Kurdistan since Ottoman times. The changed names have not been reinstituted.

You seem to claim that the principles of Islam are actually universal principles.

The Quran’s fundamental principles are based on universal values: fairness, honesty, love, mercy.

How did the Anti-Capitalist Muslim movement come about?

It evolved around my views. We first walked from Fatih Mosque to Taksim square on May Day last year with the banner “fight against capitalism.” Some 110 mostly young people attended it; the media called it the Anti-Capitalist Muslims.

It was a spirit without a body. It was a youth uprising. The fundamental principles of Gezi were freedom, pluralism, respect and solidarity. They believe Turkey should be reconstructed based upon these principles. There was an anti-capitalist spirit there; we celebrated the [Muslim holy night of] kandil; we did Friday prayers.

Was it your idea?

No, we did not propose it; the youth in Gezi requested it from us.

What does this tell us?

Prior to Gezi, the understanding [of secularists] was “we don’t approve of it but we respect it.” Now it is one step further, there is also interest. They are interested in our understanding of religion. They continue to refuse the other [classic] religious understanding, they say, we have nothing to do with it.

The secular youth are not distant to religion, are they?

The majority of Turkey’s secularists were never distant from religion; some of them were even pious. You can fast and pray five times a day and be secular at the same time.

Our understanding of Islam is based on social behavior and moral values; you should not hurt anyone, you should not steal, you should not lie, you should not remain silent against injustice; you have to have love and mercy for humans and nature. Those that [do not apply] these principles fall outside of religion; fasting, praying and covering your head is all personal.

Fasting and praying five times a day does not mean religion; these rituals for us are just details. Going to mosques or cemevis is just symbolic. … The real worship is what you do when you are in the middle of life, walking in the street in your relations with your neighbor.

It must have been interesting for you to see the Gezi youth interest in religion; I guess they don’t have a problem with Islam.

They must have been new to you as well?

I have seen women with décolleté asking me philosophical questions. Coming from conservative circles, you tend to think a woman with a miniskirt can’t have anything to do with religion. My conversations with them were more in-depth than the conversations I had in theological circles.

Who is İhsan Eliaçık ?

İhsan Eliaçık was born in 1961 in the Central Anatolian city of Kayseri.

He graduated from the theology department of Kayseri’s Erciyes University. In the turbulent years preceding the Sept. 12, 1980 military coup, he was an active member of Akıncılar, an Islamist youth movement. He spent a year in prison after the coup, but was acquitted.

In 1990, Eliaçık started his profession as an independent writer, and later founded a publishing house, Çizgi, in Kayseri. He also published a local daily newspaper in Kayseri.

His articles have been published in numerous magazine, and he also served as the editor-in-chief of the magazine, Söz ve Adalet.

Eliaçık is the author of 20 books, among them “Revolutionary Islam,” and “Islam and Capitalism.”