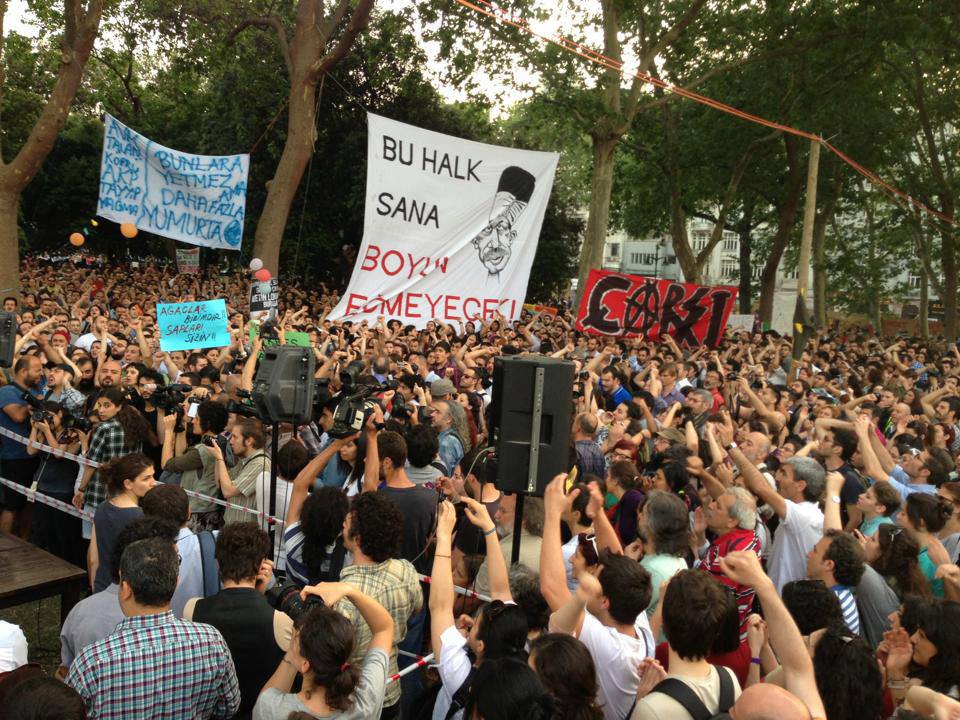 It is a sunny afternoon in August. Sitting under the dappled shade of the plane trees, I watch a group of council workers tend the flowers by the central fountain of the park.

A stray dog idly lies on the grass to escape Istanbul’s heat, while men and women stroll by, some with kids.

This is a far cry from the Gezi Park of early June, when it was under occupation by anti-government protestors. Gone are the tents, the blankets, the banners and the pamphlets.

Gone too are the gas canisters the police threw in to push the demonstrators out, in running battles in and around the park.

If anything, it looks too good.

The orange blooms in newly dug borders appear strangely fresh and orderly in what was, until recently, a poorly maintained, forgotten park.

And despite the clean-up, some traces of the unrest remain. There is graffiti on a wall which says in red paint, ”So, spray us”, below a drawing of a gas mask. Next to it is written: ”The martyrs of the revolution are immortal.”

Five people died in clashes with the police.

”The park may look beautiful to some, but this is not my park anymore,” says Hazal. She is a 30-year-old PhD student at one of Istanbul’s top universities.

She points towards where her tent stood, when she spent more than two weeks here, day and night, as part of the Feminist Collective.

“There was no state, no government, no police. It was the most beautiful experience of my life,” she says.

We are sitting on a wall at the entrance of the park, alongside two middle aged men who perched on either side of us as soon as I took out my recording equipment.

Hazal is certain they are plain clothes policemen. ”They don’t even try to hide their identity,” she says, ”they just want to harass us.”

But otherwise, life, it seems, is back to normal. The “tinerci” boys, unemployed teenagers of this area who are addicted to sniffing paint thinner, break out in a fight at a far corner, only to disperse a few minutes later. They are a common sight.

Another staple of Gezi is also back. The gay joints of Istanbul are just a stone’s throw away, and I am not too surprised by the incessant gaze of a young man in a tight t-shirt passing me by, and looking back again.

He is presumably out cruising. Or he could also be a member of the police – as Hazal says, there are many. But it is an open secret of Istanbul that Gezi Park is a major meeting point for gay men, during the day, and particularly after dark.

”As a gay man, this is where I socialised. This park helped me come out. Now, there is the internet, of course. But I still need this park,” says Volkan, who also took part in the Gezi protests.

”It is a public space,” he continues. ”It should belong to the people.”

Volkan is a gay socialist. Two things that do not go down well with the current government of Prime Minister Recep Tayyip Erdogan.

One of his cabinet ministers called homosexuality a disease. And Mr Erdogan’s AK party is boldly going ahead with its privatisation programme, selling publicly-owned assets to private business.

Gezi Park was one such flagship project. Now it is up to the courts to decide whether it will remain a park, or be opened up for development, perhaps as a shopping mall, as the government initially suggested.

In Gezi, what first started out as a demonstration made up of a few city planners and environmentalists to save the trees, soon pulled in a diverse array of people disenchanted by the government’s Muslim conservatism, its free-market policies, or both.

”It was a game changer for us gays,” says Volkan. ”In the days after the police forced the protestors out of  the park, we organised Istanbul’s annual gay pride. And for the first time, it has been welcomed by such a  huge crowd of well wishers and supporters.”

Gezi protestors seem to have shed many prejudices among themselves. United against a common enemy,  unlikely alliances have emerged.

I meet Ihsan Eliacik, the spiritual leader of the anti-capitalist Muslims, another prominent group in the Gezi  protests, in the borough of Fatih, a stronghold of pious Muslims where the majority support the government.

But Mr Eliacik and his followers, observant Muslims, voice some of the harshest criticism against Mr  Erdogan and his government. In fact, the prime minister is suing the theologian for what he considers are  insults on Twitter.

Mr Eliacik is unimpressed. ”You criticise leaders, it is what is normal,” he says. ”I may be harsh with my  words, but I believe this government is selling the country to make a few people rich. They don’t represent  the true spirit of Islam.”

What is then the true spirit of Islam, I ask him. ”Social justice,” blurts out Mr Eliacik. ”Being on the side of the poor, the oppressed.”

I ask him if that includes the gay community. ”It is not up to me to judge people on their personal choices.” he says. ”When we did our Friday prayers in Gezi Park under the rain, the gays were holding umbrellas for us.”

This, in Mr Eliacik’s words, is the ”Gezi spirit” and in order to keep it alive, anti-capitalist Muslims organised street events throughout the month of Ramadan, the holy month of fasting, in the shape of communal public meals to break the fast at dusk, the iftar meal.

Laying newspapers on the streets and in parks, the socialist Muslims invited everyone to eat together on the ground. It was a gesture of humility, they said, in defiance against the capitalist government.

One such iftar was staged in Buyukada, the largest of the Princes’ Islands just off the shore of Istanbul, the bastion of the secular elite who have their summer retreats there.

Certainly not your first port of call for a socialist uprising against the privileged, but the islanders hosted this event and invited the anti-capitalist Muslims.

An unprecedented sight, for a country such as Turkey, where for years social attitudes and politics have been largely defined by the tug of war between the secular on the one hand and the religious sections of society on the other.

Perhaps this ”Gezi spirit” could be a sign that old attitudes are reaching their sell-by date?

Not so quickly, according to Roni Margulies, a poet, journalist, Marxist, atheist, and all-round campaigner, who was also in the park.

He thinks it likely that given the diversity of the protestors, their differences of opinion will eventually come to the fore.

”As happens with mass movements, there was a tangible atmosphere of solidarity, comradeship in the park. It happens in situations like that, everyone fighting against the police together.”

Breaking the grip of the AKP government is by all counts a hard task. Mr Erdogan is still the country’s most popular politician, with three election victories under his belt.

At the last round of votes, he received close to 50% of the electorate’s support. His critics may accuse him of being too business friendly, but Turkey’s GDP tripled under his rule.

And the secular opposition in parliament is weak and fractured.

Can the Gezi Park protestors unite in the future to become a credible political force and challenge Mr Erdogan’s authority?

No-one is sure. But the movement has an important legacy for Mr Margulies.

”A threshold of fear has been overtaken. People are not scared of the pepper spray and the water cannons anymore. So life will be that bit more difficult for the government from now on – that I am sure of.”

A victory, it may not be. But with public forums, marches and street events popping up all over Istanbul, the protestors believe they are finally making their voices heard, after a long lull.